Do you want a holiday full of mystery, gothic and originality? For ghostbuster enthusiasts the castles of the Aosta Valley are a must.

Ghost stories at Issogne Castle, but don’t worry. The Countess Bianca Maria loves tourists and her welcome in the castle is excellent, especially when she finds herself in front of nice guys. It is said, in fact, that when a handsome young man appears in the castle, he cannot resist and tries to kiss him! 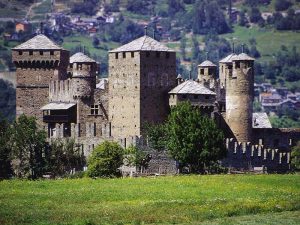 Bride of Renato di Challant, but neglected by him to devote himself to achieving the greatest consensus and power possible alongside the Duke Carlo III of Savoy, Bianca Maria did not agree to be put aside. So he sought attention in the Milanese courts. But it seems that her love affairs didn’t last and that, once satisfied, she would kill her lovers. Fatal was the murder of Ardizino di Valperga for which she was beheaded on 20 October 1956 in front of the Sforzesco Castle in Milan.

Testimonials tell that they saw the ghost of a beautiful woman on full moon nights. He holds a beheaded head on the second floor loggia or near the octagonal well of Issogne castle.

The Forte di Bard , 45 km from Aosta, is another of the medieval castles of the Aosta Valley. 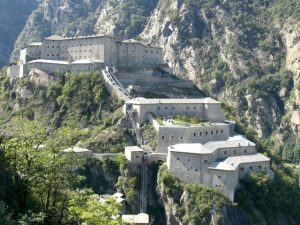 Napoleon bombed it for a whole day before conquering it. The highest point can be visited by following a path between the walls, but for the more “bedside”, it can also be reached by taking the panoramic crystal lifts. Near the castle, to visit, the Museum of the Alps, multimedia, and the Ecomuseum of the chestnut.

Following an ideal map of the castles of the Aosta Valley , approaching Aosta, you arrive at the Fenis castle . Born for defense reasons but then handed over to the Challant family, it reveals its soul as a patrician castle in the famous fresco scene dating back to the 15th century of San Giorgio killing the dragon. 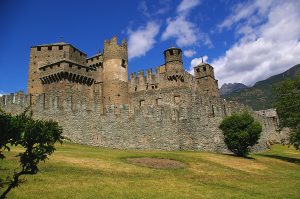 A spectacle of nature, the 360 ​​degree view of the mountains around. To be enjoyed, if the weather of the Aosta Valley allows it, tasting the Piata, a typical dessert made with raisins, dried fruit and apples.

Many other medieval castles can be visited in the Aosta Valley. Worth noting is the Royal Castle of Sarre , former property of Vittorio Emanuele II of Savoy, the Sarriod de La Tour Castle , on the road to get to Courmayer, and the Verres Castle , attached to the Issogne Castle.

Looking for other destinations in Valle d’Aosta? Verrès , Pila and Aosta are just waiting for you.

If you are interested in more information on Castles in Valle d’Aosta, there are some interesting books to read carefully.