The Turkey has always been considered a bridge between West and East , the point of contact between two cultures and different ways of living, which have, however, been able to merge into this magical land.
A trip to Turkey will introduce you to a unique country, suspended between past and future, ready to give you fantastic memories.
It is a very large country , so that your holiday does not turn into a tiring tour de force, it would be advisable to focus the trip to Turkey towards a specific area.

The area most easily accessible from Italy is the Aegean coast . It offers visitors beaches with clear waters, picturesque fishing villages, olive groves and important archaeological remains. In this land, in fact, the great civilizations of Asia Minor were born , whose history is testified by the ruins of Troy , Ephesus, Pergamum ( Bergama ) and the wonderful town of Assos (Behramkale).
In these places it is possible to admire the scenarios of the Homeric tales; the tomb of Achilles and the island of Bozcaada (Tenedo), where the Achaeans hid after preparing the Trojan horse trap, and Mount Kaz Dagi, where Paris gave the apple of an hour to Aphrodite in exchange for Elena’s love. 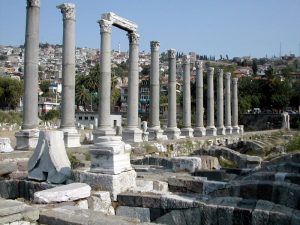 The most important city on the coast is Izmir ( Izmir ), the third center of Turkey after Istanbul and Ankara, and according to tradition it was the birthplace of the poet Homer . Izmir, a modern and cosmopolitan city, hosts important cultural events. Among these, the International Arts Festival (between June and July) and the International Fair (between August and September) stand out.
Although Izmir is a modern city, there are numerous well-preserved historical sites. Not to be missed are Marco Aurelio ‘s agora, the church of San Policarpo, Hisar and a large variety of richly decorated mosques. To visit the Clock Tower and the Kemeralti market, the ideal place to buy antiques, jewelry, clothes and the delicious dried figs and raisins of Izmir. 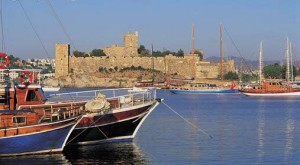 Another important stop on your trip to Turkey is Bodrum , the ancient city of Halicarnassus . Today it is a famous seaside resort, whose clear waters and characteristic white houses attract hundreds of tourists. In the city there was one of the seven wonders of the ancient world, the Mausoleum of Halicarnassus, of which only a few ruins remain today. Fortunately, you can still admire the splendid Bodrum Castle (15th century AD). It was built by the Knights of Rhodes and is now home to the Museum of Underwater Archeology. You will find numerous souvenirs and other objects in the bazaars, where jewelry, footwear, rugs and typical products such as sumak, red chilli powder are sold.

Other travel destinations in Turkey

If you wish to take the route of your trip to Turkey to beaches less crowded with tourists, you can go to Alaçatı, Urla Iskelesi or to the small fishing village of Çeşmealtı . The village of Pamucak offers a splendid semi-deserted beach if you go there during the week.
The ideal destination for nightlife lovers is Kusadasi. It is a well-known tourist resort known above all for its numerous restaurants and clubs. Here you can enjoy Baklava, a honey-based dessert or Raki, the traditional anise-based drink.
Near Kusadasi is the important archaeological site of Ephesus , the city of Miletus, home of the great ancient philosophers and the spa town of Pamukkale .

To end the trip to Turkey along the Aegean coast you can visit the beautiful town of Assos ( Behramkale). It is there that you will find the fabulous temple of Athena, built by the first Doric colonists. From the top of the acropolis, on clear days, you can see the city of Pergamum and the island of Lesvos. In Assos you can also visit the remains of the gymnasium and the Greek theater, as well as a mosque and a Turkish fortress from the 14th century.
From here you can extend your trip to Turkey to the seaside resorts of the Mediterranean coast or to the cities and archaeological sites of the interior, in the Cappadocia region . Or, again, towards the beautiful capital Instanbul .

One thought on “Trip to Turkey: Izmir, Ephesus and Bodrum”