Art, food, music and fashion are the four pillars of Made in Italy, an intangible resource on which, at least in words, we focus a lot for the development of our country. Fashion, in particular, is a sector closely linked to places of production, cities, real fashion capitals, where companies and events are concentrated. Among the fashion capitals in the world stand out Paris, Milan, New York and London. But what are the fashion cities in Italy? 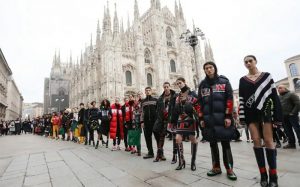 Cities of fashion in Italy: Milan

The first city one thinks of when it comes to fashion in Italy is Milan. Due to its strategic position and the international connections it has been able to develop, Milan has long held the record as the city of Italian fashion par excellence.

Numerous stylists and fashion magazines have elected Milan as their headquarters, contributing to its reputation as the main fashion city in Italy, among the most important in the world.

The area of ​​the city most affected by the phenomenon takes the name of Quadrilatero della moda, delimited by four streets: via Monte Napoleone, via Manzoni, via della Spiga and corso Venezia. Four streets where fashion is breathed, luxury is staged and many tourists are attracted to shops, showrooms and jewelers.

The National Chamber of Italian Fashion is also located here, which has coordinated events related to the fashion sector since 1958, in particular the fashion week which takes place twice a year to present the spring / summer and autumn / winter collections.

Milan’s trump card in the world of fashion, as well as design and furniture, is its internationality. An Italian metropolis with a strong European image, Milan has been able to build over time a strategic know-how in the business which, in the fashion and design sector, is nourished thanks above all to a series of trade fairs and events of great international importance.

In addition to the aforementioned fashion weeks, people and companies from all over the world flock to events such as the Macef – International Home Show; Milano Unica, fair dedicated to fabrics and accessories; the Salone Internazionale del Mobile, one of the most influential meeting points in the home, furniture and design sectors.

Events and demonstrations with a strong international projection, real showcases for the city, characterized by large turnout and winning numbers. 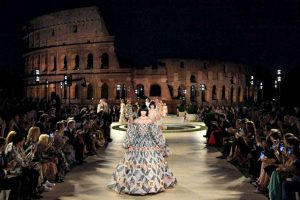 Cities of fashion in Italy: Rome

Impossible not to include the capital, Rome, in this journey between the cities of fashion in Italy. The numerous tourists who flock to the city every day are inevitably attracted by the elegance of the most glamorous areas of Rome, for a stroll through the luxurious boutiques of Via Condotti and Piazza di Spagna, where all the main Italian and international brands are present.

The Eternal City offers an incomparable setting for boutiques, fashion shows and events related to the world of the world. A seductive scenario spread in the global imagination also thanks to the film Roman Holidays, with the icon of class and elegance par excellence, Audrey Hepburn.

The most significant urban place for worldly fashion events in Rome is the Spanish Steps, a perfect catwalk for events and fashion shows. The construction of the collective imagination passes this time to the small screen: the staircase is the backdrop to the dreams and actions of the famous nineties TV series, The girls of Piazza di Spagna.

The Fendi fashion house, founded in Rome in 1925, is particularly active in strengthening this close link between fashion and the urban scenario. In October 2015, Fendi moved its headquarters to the Palazzo della Civiltà Italiana (also known as the “square Colosseum”) to Eur.

However, the Fendi operation goes further: the brand sponsors a series of restoration works on the historic monuments of the capital. A cultural patronage that has given new light to the Trevi Fountain and which is the prelude to a project that will restore numerous Roman fountains to their splendor.

Like Milan and Florence, Rome also has its own fashion week, Alta Roma, with a double winter and summer event. An avant-garde event in which art and fashion, tradition and future merge, strictly against the backdrop of the Eternal City.

Milan, Florence and Rome are the three main fashion cities in Italy, where the link between fashion, urban spaces and cultural traditions merges to generate extraordinary results.

Italy is a symbol of elegance and an unmistakable style envied all over the world. The history, resources and places of our country are the ideal environment for the fashion industry to flourish. A sector that also enjoys the talent of young Italian designers, but also of foreign stylists and designers who come to train in the academies of the Italian fashion cities.

This is how the city, its art, its history succeeds in influencing the creativity of stylists and luxury artisans. From these places the creatives of fashion draw inspiration to draw new stories every day, and to build the products of tomorrow. 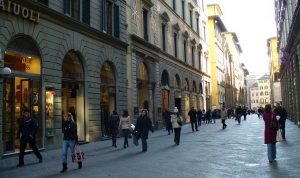 Cities of fashion in Italy: Florence

Another important and fascinating city linked to the fashion world is Florence. Here the artisanal production was born, in particular that of leather goods and shoes, and the city is teeming with goldsmith shops, leather artisans and shoemakers.

In particular, the Oltrarno, the district of Florence on the left bank of the Arno, is the central hub of the craft shops. It is a place of enchantment, ideal for getting lost in colors and scents, such as that of leather, and for observing the craftsmen working on their creations in workshops full of charm. Artisans who, respecting a historical tradition, work with their heads and hands, blending creativity and manual skill.

To understand the value of craftsmanship in Florence, one must look to the past. Since the Middle Ages, each craftsman has had his own workshop where he works with metals, fabrics, leathers or glass. A work that has been handed down from generation to generation up to the present day. These are products appreciated all over the world, and they are the roots on which Made in Italy is founded.

The need has recently emerged to protect these artisanal products and processes, which combine tradition and innovation. The Firenze Artigianato Artistico Foundation, founded in 2001, aims to promote and preserve this artistic-cultural heritage through exhibitions, workshops and guided tours of the shops of the Conventino, a former monastery of the late nineteenth century that has become a real multifunctional center that it hosts as many as twenty shops.

This historical-cultural background favored the birth, right in Florence, of some of the most famous Italian fashion brands, now internationally renowned: Gucci, Salvatore Ferragamo, Cavalli, Pucci.

Florence is also an extraordinary city of art, and the world of fashion has been able to obtain its museum spaces. Think of the costume gallery located inside Palazzo Pitti, the Salvatore Ferragamo museum, the Gucci museum, the more recent Capucci museum.

Like Milan, Florence also has its own fashion week, Pitti Immagine, focused on men’s and children’s fashion and accessories. An unmissable event, which attracts industry professionals and enthusiasts from all over the world. 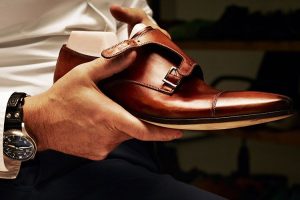 They are famous shoe brands all over the world, some especially overseas, where there are more buyers who can afford to spend a lot on high quality shoes. The made in Italy of footwear in fact translates into quality, luxury, elegance. According to some data, 20% of the made in Italy products are represented by shoes. In addition to the big brands (such as Tod’s or Gucci), most of them are made up of small and medium-sized enterprises that have been able to transform themselves into small global excellences.

So what are the best Italian shoes?

Here is the list of the best Italian shoe brands, the most famous ones worldwide, for men and women:

Do you want to become a shoe designer and work in a prestigious shoe factory? learn from the best artisans of “made in Italy” with an italian shoemaker online course.