The island of Santorini in Greece belongs to the Cyclades archipelago, in the Aegean Sea, near Ios , Folegandros and Sikinos.
Santorini , along with Mykonos and Crete, is among the most famous and visited islands in Greece.

Santorini, Thera in Greek, was formerly called Strongili and Kalisti, and is famous above all because it was the theater of the largest volcanic eruption in the world, which destroyed part of the island itself and marked the end of the Mycenaean civilization .
Today the island is formed by a submerged volcano, while the caldera comes out of the waters. 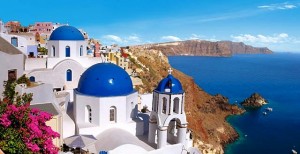 Fira is the capital and main center of the island. The village is made up of traditional white houses and steep streets that climb to the top of the volcano’s caldera. Many tours to get to the top of the mountain offer donkeys to make the journey more comfortable.

Moving just north of Fira, you will come across the pretty village of Imerovigli , also called “balcony on the Aegean Sea”. In fact, the town is arranged in a semicircle on the volcano, so stopping to admire the sunset from its streets is truly exciting.

Oia is considered the most beautiful and picturesque village of Santorini, built on red and black rocky layers that create an extremely suggestive sight.

Particularly impressed is the islet of Néa Kalméni , accessible by boat. It is formed by a solfatara that releases vapors and fumes, so much so that it was considered magical by the ancient Greeks. And who knows, when you go there, you won’t find out that it really is. 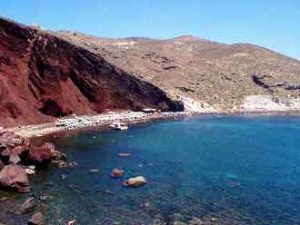 The island of Santorini in Greece is a real gem, all to be experienced and discovered. A trip to these places is absolutely recommended, and will give you unique emotions leaving you with special and indelible memories.